The new Fire & Water Piano Sheet Music Book features loved works by Debussy and original arrangements of works by Rachmaninov, Saint-Saëns and De Falla, together with a new composition by UK-based Chinese pianist, Ji Liu, described by The Guardian as a ‘wunderkind pianist’. Suitable for intermediate to advanced pianists, this stunning collection of solo-piano pieces beautifully illustrates the concepts of fire and water, inspired by the ancient Chinese five-element theory of Wu-Xing, as previously explored in Ji Liu’s well-received 2018 album of the same name. At a time when the world is in dire need of calm and peace, Ji Liu has revisited, dwelled and expanded upon these vital elements in his must-have music book.

In this collection of scores, Ji Liu showcases an exploration of keyboard virtuosity and the colourful world of sound with his own arrangements, performance commentary and composition. Enjoy a collection of works that elegantly reflect the calming character of water, alongside contrasting intense and fast-paced pieces inspired by the element of fire.

Ji Liu has been described as a ‘wunderkind pianist’ by The Guardian and ‘a major talent’ by ClassicalSource.com, positioning himself as one of the brightest new stars in classical music. In 2014, Ji Liu’s debut album Piano Reflections stormed the UK classical charts, reaching number one and making him the UK’s biggest-selling classical breakthrough artist of the year. Following this success, Ji Liu went on to release two more albums, Piano Encores and Pure Chopin. In 2016, Pure Chopin was nominated as one of the 20 best classical albums of the year by Classic FM. 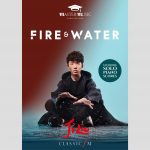 There are no reviews yet.

We use cookies to ensure that we give you the best experience on our website. If you continue to use this site we will assume that you are happy with it.Ok