Nostalgia Op. 3 No. 2 for Solo Piano Composed by Luka Okros

Concert Pianist, Composer and Social Influencer Luka Okros has established himself as one of the most promising musicians of his generation. His performances have been praised by critics as ‘intense, strong and natural, with an impressive creativity’. Luka has already performed in some of the world’s greatest concert halls – from London’s Wigmore Hall to New York’s Carnegie Hall. Luka currently resides in London with an Exceptional Talent Visa granted by the Art Council of England.

In addition to his career as a concert pianist, Luka works on creating his own compositions. Nostalgia Op. 3 No. 2 for Solo Piano was composed in 2020. 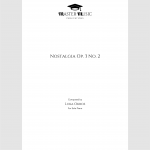 1 review for Nostalgia Op. 3 No. 2 for Solo Piano Composed by Luka Okros

We use cookies to ensure that we give you the best experience on our website. If you continue to use this site we will assume that you are happy with it.Ok