Praised for his “sensitive and unpretentious musicality” by Pianist Magazine, and referred to as “a major talent” by The Classical Source, Ji Liu has positioned himself as one of the brightest stars in classical music. In addition to topping the classical charts as a Global Classic FM artist on numerous occasions, he also delights audiences around the world, from the Royal Albert Hall in London to Carnegie Hall in New York.

This piano arrangement of Saint-Saen’s Aquarium from Carnival of the Animals was written during my preparation of recording my fourth solo album Fire and Water. While I was curating the programme of the album, I particularly wanted to guide my listener to this musical journey with something fluid, mysterious, intriguing, colourful, pianistically brilliant, yet light and elegant – which would infinitely prepare for the darker and more brutal works later on. While the Godowsky’s transcription of Saint’s Saen’s Swan from Carnival of the Animals is definitely something would meet this calibre, I was thinking something would make a more beautiful “wink” in sound.

While I am looking for exploring the shimmering, atmospheric, yet metallic sound that modern concert grand piano would produce, I deliberately kept the running passage of the right hand in the higher register to reflect the sound of the flute and glass harmonica in the original version. The figuration of the right hand is also a homage to Chopin’s Etude Op.25 No.1 while the first note of each group is treated as the melodic line; and the rest of the decoration notes are drawing a unified wash of sound that depict the dynamic yet serenity of the Aquarium. 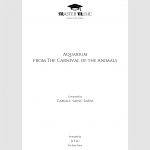 There are no reviews yet.

Keep Shopping
We use cookies and by using this site we assume that you are happy with our privacy policy.Accept & Close